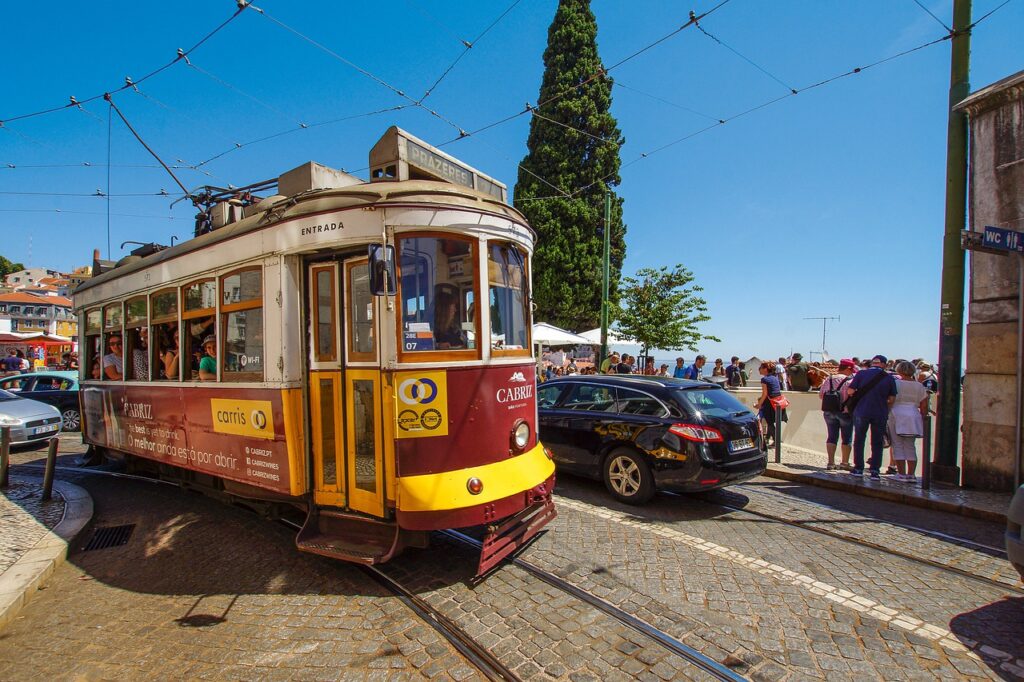 The yellow tram 28 of Lisbon is one of the famous city icons. It is its route that makes it a highly popular way of transport for tourists.

On August 14, 1890, the first cable car went to Lisbon. A track gauge of 900 millimeters was chosen for this. With trams, except for Lisbon, this track gauge only occurs in Linz.

The first electric tram line was put into operation on August 31, 1901. The length of the net was 145 kilometers at the peak and there were 419 motor cars and 100 trailers. In the following years, the metro and bus increasingly took over the transport function of the trams and large parts of the tram network were closed.

Due to tourism, the importance of this historic tram increased again. Closure of the entire network was therefore no longer an issue. In addition, the trams often run through such narrow streets, where buses cannot even come.

The tram goes on its route through the districts of Graca, Alfama, Baixa and Estrela. Beautiful neighborhoods with steep, narrow streets and sharp curves, where tram 28 just fits through.
You can hop-on tram 28 from as early as 05:40 in the morning, till it’s last ride at 23:30.

Assuming you start at the first boarding point of tram 28 on the Praca Martim Moniz, you will pass the following sights. Some of the sights below are also mentioned on my tourist map. These are marked with the corresponding number on the card.

Tip: We have made a map with the route of tram 28 and other trams in Lisbon. As well as 12 tourist sights. Plan your route around Lisbon in advance and take advantage of the options the city has to offer. Buy this tram 28 Lisbon map for only 5 euro.

ON ROUTE THROUGH THE ALFAMA DISTRICT

You are currently in the Graca neighborhood. Just got in or you pass Igreja Anjos. Parish Church of Our Lady of the Angels. This church may not even stand out from the outside, but inside it is richly decorated with beautiful sculptures and old paintings. It has seven altars of gilt carvings.
You descend through all kinds of streets towards the Alfama district and there on the left is Mosteiro De Sao Vicente De Fora (2) waiting for you. The Monastery of Sao Vicente de Fora is located at one of the highest points in Alfama. It has an impeccable whitewashed exterior and tall towers.

The tram then twists through the narrow streets of Alfama and at Miradouro de Santa Luzia you get a beautiful view of Alfama and the Tagus. Perhaps a nice point to get out and explore the Alfama district. Walk a bit back to Monseiro de Sao Vicente and the nearby thieves market (4) and National Pantheon Santa Engracia (1). The main sights of Lisbon are all in the Alfama district.

With a Lisbon Card you have free access to the tram 28!

Before tram 28 leaves Alfama, you will pass Sé de Lisboa (7) (Igreja de Santa Maria Maior). Founded in the 12th century, the Cathedral of Sé, also known as the Lisbon Cathedral, is the oldest church in Lisbon. It contains details of Romanesque and Gothic architecture styles, making it look like a beautiful castle.

The numbers after the sights represent the sights listed on our tram 28 Lisbon map.

ON ROUTE THROUGH THE NEIGHBORHOOD OF SAO BENTO

Tram 28 continues its route through the center (Baixa) before it plunges into the Bairra Alto district. If you step out of this, you almost drove a round. If you walk northwards through the shopping street, you will arrive at Figueira Square again.

In the straight streets of Bairra Alto, tram 28 makes a sharp corner for a small square with some cafes and terraces. On one of the chairs is a statue of the most famous Portuguese writers; Fernando Pessoa.

After that you will soon see a large stately building with tall pillars on your right. This former monastery from the 16th century is now the seat of the Portuguese government and a magnificent example of architecture.

Use our route map as a handy tool for following the route.
If you would like to stretch your legs for a while, you can go a few stops further in the Jardim de Estrela. A beautifully landscaped park.

This is also a nice place to catch tram 25E back to the Baixa. You can also catch this tram all the way at the end of the route. 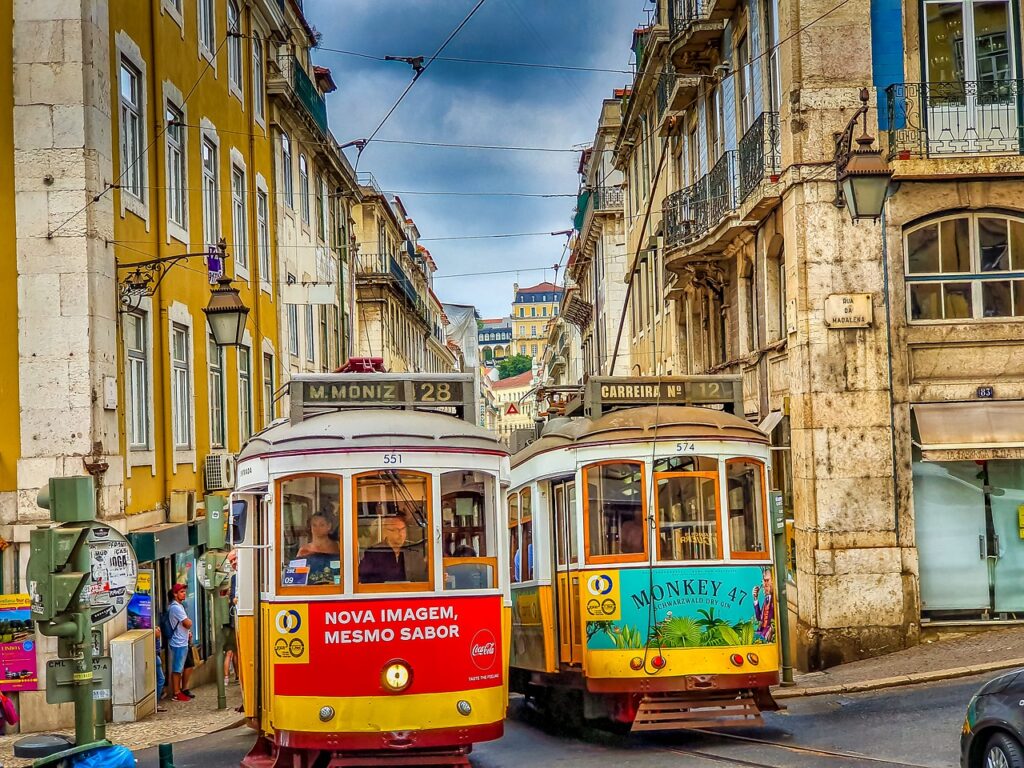 Tram 28 connects Martim Moniz with Campo Ourique. The boarding point is on Praça Martim Moniz. From the center of Lisbon, Figueira Square, it is less than a 5 minute walk in a northeasterly direction.
The route goes through the popular tourist areas of Graca, Alfama, Baixa and Estrela. Tram 28 runs on this route through the most picturesque and narrow streets of Lisbon.

Most visitors start from Martim Moniz. You can also board halfway, but then you will probably have to stand, since all seats will be taken by other tourists.

There are lots of sights along the route. A place at the window is therefore highly desirable. Standing becomes a bit tricky because the limited height of the windows means that you probably have a street view mostly.

Below you will find all stops where tram 28 passes. From around six o’clock the tram starts its round until one past ten.

Where to buy your Tram 28e Tickets

If you only want to take the yellow tram 28, you can buy your ticket directly from the tram driver. It is best to start at Martim Moniz, otherwise all seats will be taken and you have to stand and see nothing of the route. Big bummer.

If you want to visit several sights in Lisbon and use the tram 28, you better buy the Lisboa Card. Tram 28 can then be used free of charge with this Card. In addition to free public transport, it also gives access to 26 other sights in Lisbon.

There are more ways to take a tram-ride through Lisbon. Another great option is to take the Historic Hills Tram Tour as it is the longest tram route in Lisbon! It passes through lots of Lisbon’s top districts, including Baixa, Graça, Alfama, and Estrela. And best of all, you can hop on and hop off on this tram and discover Lisbon in an easy way. 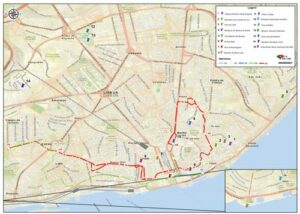 This Lisbon trams map covers all five trams, including tram 28e. This famous yellow icon of Lisbon takes it route through the popular tourist areas of Graca, Alfama, Baixa and Estrela. The map also marks all boarding points and 12 most interesting sights to visit. Your single must-have map when travelling across Lisbon. You can download it for free. If you like it, please buy me a coffee for my next citytrip.